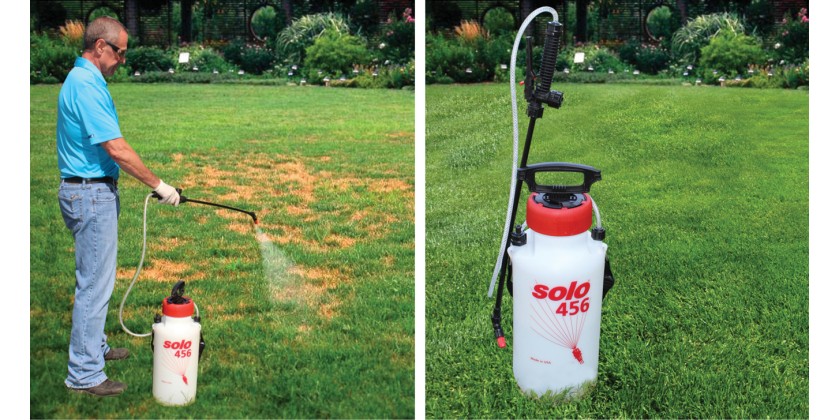 The beautiful lawn can be quickly destroyed by brown patch or large patch, which are serious fungal diseases (each caused by different strains of Rhizoctonia solani). Disease can develop rapidly when daytime temperatures are warm (75 to 90 °F) and humid, nighttime temperatures are above 60 ºF, and there is an extended period of leaf wetness. Generally, symptoms of brown patch begin on cool-season grasses (tall fescue, ryegrass, bluegrass and bentgrass) during the late spring. It may also occur on these grasses during warmer periods of the winter months. Warm-season grasses (St. Augustine grass, zoysia grass, Bermuda grass and centipede grass) most commonly are affected by large patch during the early spring and late fall.

Symptoms of brown and large patch diseases may vary greatly with the type of grass and soil conditions. The diseases usually cause thinned patches of light brown grass that are roughly circular in shape. These areas range in diameter from a few inches to several feet. Often the center of the patch will recover, resulting in a doughnut-shaped pattern.

When disease conditions are favorable, large areas of the lawn may be uniformly thinned and eventually killed with no circular patch being evident. Close inspection of cool-season grass blades reveals small, irregular, tan leaf spots with dark-brown borders. Infected warm-season grasses rarely have leaf spots but instead have rotted leaf sheaths near the soil surface.

All types of warm-season or cool-season lawn grasses can be affected by large patch or brown patch, respectively. There are no turfgrass species entirely resistant to these diseases currently available. Brown patch is the most common and important disease of tall fescue in the Southeast. In most cases affected areas are able to recover, but tall fescue lawns less than a year old can be completely killed.

The best way to prevent brown patch or large patch is by following good lawn care practices. This is much easier and less expensive than the use of fungicides and can be very effective.

2. Irrigate grass only when needed, generally 1 inch of irrigation water per week, but do not subject the lawn to drought conditions. Water early in the morning. This disease can spread fast when free moisture is present, especially for greater than 10 hours.

3. Avoid spreading the disease to other areas. Remove clippings if the weather is warm and moist to prevent spread to other areas during mowing.

4. Keep lawns mowed on a regular basis to the proper height for the grass species you are growing. Lower than optimum mowing height can increase disease severity.

6. Have the soil tested and apply lime according to test recommendations. Disease may be more severe if the soil pH is less than 6.0.

However, the best option for the overall health of your lawn is to take preventative measures. Preventatively, fungicides should be applied to turfgrass fescue in the late spring or early summer. Warm-season turfgrasses require fungicide treatments in the spring, but especially in the fall for best disease control. Start applications around October 1st for the fall and late April for the late spring applications.