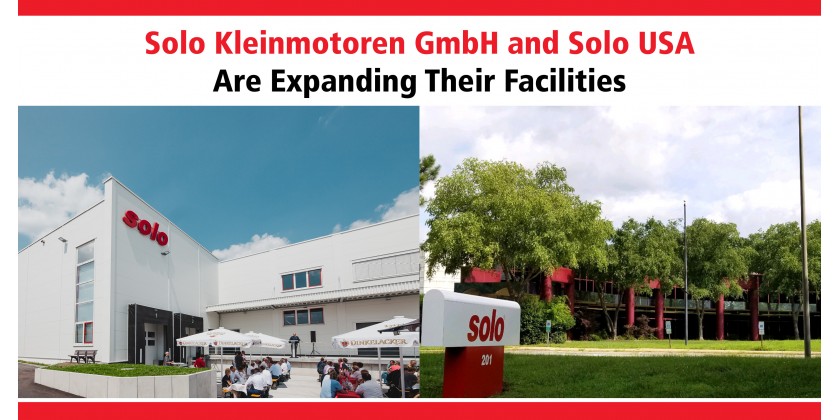 Solo Kleinmotoren GmbH and Solo USA Are Expanding Their Facilities

Solo USA’s sister corporation, Solo Kleinmotoren GmbH, located in Sindelfingen, Germany, expanded its facility with the addition of a new, two-story 33,756 square feet building at the Sindelfingen-Maichingen site in July 2021.

Over 5 million Euros has been invested in the construction of the new building. It houses the assembly, warehouse, spare parts departments, offices related to these departments, and the Event Center.

This facility expansion comes at the right time. In recent years, demand for Solo’s products has skyrocketed making a larger building and greater production capacity a much needed acquisition.

The 130 employees at the Sindelfingen-Maichingen site develop, produce and sell sprayers and mist blowers for plant protection, cleaning and disinfection, as well as a small line of cut-off machines for the entire global market.

The SOLO brand, based on the continuous product development and innovations, is represented by Solo Kleinmotoren GmbH, Solo USA, and eight subsidiaries in our most important core markets as well as strong sales partners in most countries of the world.

The new building was named after the two founders and long-time managing directors of SOLO Kleinmotoren GmbH: The Hans and Heinz Emmerich Hall.

Solo Incorporated, the worldwide leader in the production of backpack, handheld, and one-hand sprayers, with its 90 employees moved to a new facility located at 201 Enterprise Drive, Newport News, VA on June 23, 2021. The 64,000 square foot building is in the Oakland Industrial Park in northern Newport News near Fort Eustis and will support Solo's plans to expand its production operations.

Over $5 million has been invested in the move. The new facility allows for the addition of two new blow molding machines, which will be producing a new series of one-hand and handheld sprayers. In addition, Solo will begin injection molding of sprayer components. This is all a part of the company’s business plan to decrease dependence on foreign suppliers and increase control over the quality of Solo sprayers, the quality for which the Solo name brand has long been known.

The new building sits on a 10-acre lot which will accommodate future expansion. Solo Incorporated has made and assembled most of its sprayers in Newport News, Va for over 35 years. The move signifies a new era for Solo Incorporated.